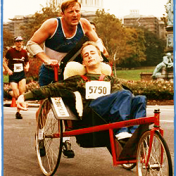 When Dick and Judy Hoyt became parents on January 10, 1962, it quickly became evident that something had gone terribly wrong. The umbilical cord was wrapped around their son’s neck.  Because of oxygen deprivation to his brain, little Rick had cerebral palsy.  He would never be able to walk or talk. Numerous physicians assured the Hoyts that their son was… Read more »