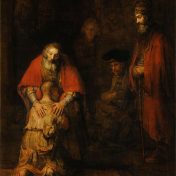 Throughout Lent, we’re exploring the parables of Jesus – the two dozen or so stories that were his chief means of describing the reality of God’s rule on earth.  It is “a picture which those who have seen the original in St. Petersburg may be forgiven for claiming as the greatest picture ever painted.” That’s Kenneth Clark, the art historian. … Read more »