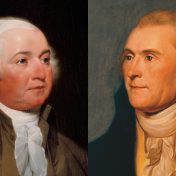 According to historians, what was the most contentious presidential election in American history? Which election was most deadlocked around questions concerning religion?  And what’s the only election in which both presidential candidates identified themselves as Unitarians? The answer to all three questions is the same:  the election of 1800, which pitted the incumbent John Adams against challenger Thomas Jefferson.  Because… Read more »