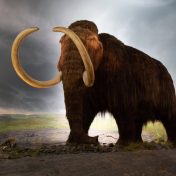 Thomas Jefferson was obsessed with mammoths.  The third president of the United States may be renowned for authoring the Declaration of Independence, founding the University of Virginia, and endlessly tinkering with his dream house at Monticello, but his mind never strayed too far from the possibility that giant prehistoric elephants were still alive and rampaging through North America.  When Jefferson dispatched Meriwether… Read more »