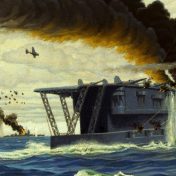 During World War II, America’s Office of Strategic Services – the precursor to the CIA – was assigned the task of devising subversive ways to help defeat Japan.  Some of the OSS’s initiatives could best be described as non-traditional.  More than two million dollars were invested in the development of the “bat bomb.”  Project managers hoped to drop thousands of Mexican… Read more »