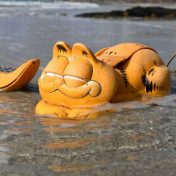 Two years ago, the great Garfield Phone Mystery was finally solved. Early in the 1980s, after a fierce Atlantic storm, bright orange objects began to appear on the beaches of the Brittany coast of France.  They were Princess-style phones in the shape of a certain pizza-loving cartoon cat.  If you pick up the receiver, Garfield’s eyes flutter open.  The novelty… Read more »